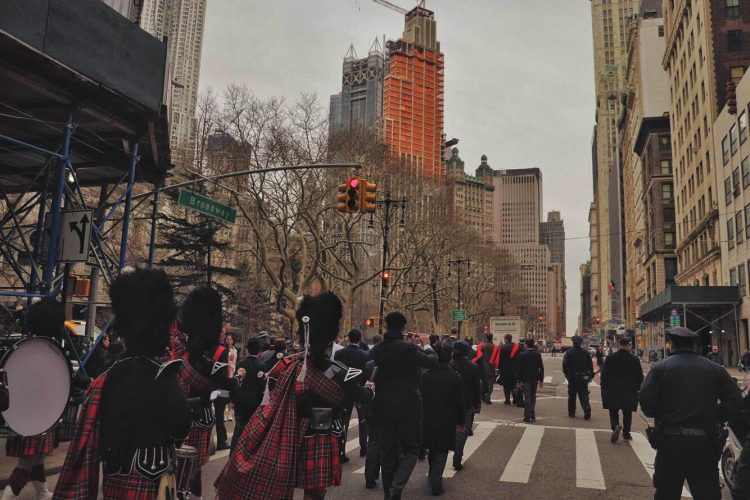 The third annual Walk for Life in New York City took place on the 25th of March. It was a very timely event because of the abomination which had taken place two months before. As is now general knowledge, Governor Cuomo of New York signed in a bill on January 22nd, allowing for the abortion of children through the third trimester and up to birth. It also denies life to those children who survive the horror and trauma of an abortion. The 25th of March was a very appropriate day for the Walk for Life, it being the Feast of the Annunciation and Conception of Our Lord, Jesus Christ. With this in mind, the Saint Louis de Montfort Academy, along with the American Society for the Defense of Tradition, Family, and Property (TFP), arose at the very unappealing hour of three o’clock in the morning in order to attend. The Holy Choir of Angels Band as well as the Blacksmith Angels Bagpipes and Drums in full Scottish Regalia, both run by the Saint Louis Academy, were there encouraging the marchers with martial tunes and cadences.

The Walk for Life was preceded by the Pledge of Allegiance. The contrast between the Pledge and what the abortion side promotes is very stark. As the pledge ends “With liberty and justice for all,” the abortionists deny unborn children as part of that “All.”  Afterwards was sung the National Anthem, followed by two speeches with a few prayers interspersed between. The first was given by a man who is very active in the pro-life movement in New York City, the Abortion Capital of America. He gave a rousing speech, encouraging everyone to stand up for the right to life. During this first speech, counter-protesters showed up with a few instruments, playing very base and tribalistic music. They were presently ignored and not given the time of day.

The second speech was the touching testimony of an abortion survivor. Her mother was forced into it by her grandmother. When she did not die, the doctors became angry, but they could not legally kill her anymore. She has forgiven her mother as all good Christians should do. After her speech was over, the Walk began, with the Academy band in the front. The march ran down Broadway Street and past Wall Street. After the Walk for Life had reached the end, the band put their instruments away and headed for the pickup spot. The next stop for the group was a very beautiful Gothic style Catholic Church, in order to offer our thanks to Our Lord for the grace to defend the defenseless, the innocent, the oppressed. Afterwards, the Academy and TFP headed back to Pennsylvania for a well deserved rest. May Our Lord, through the intercession of His most Blessed Mother, Mary Ever-Virgin, bless this great country of America, and rid it of the heinous and disgusting legal murder called abortion.