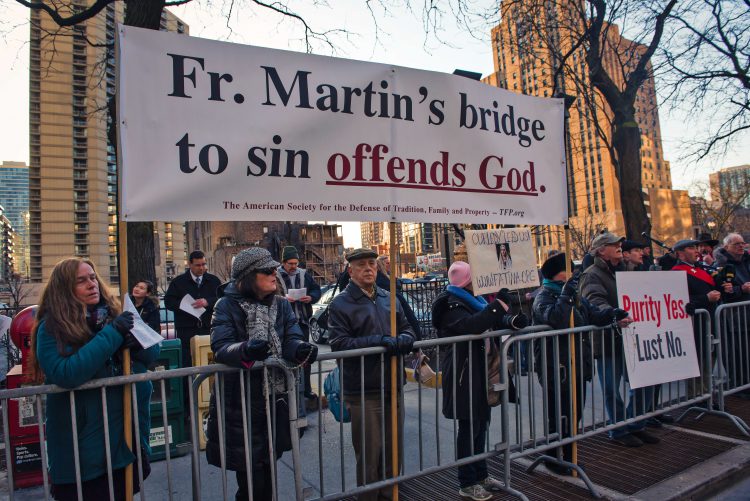 In our times, evil people are constantly spreading heinous errors throughout the world in an attempt to destroy Christianity. In the past, the Catholic Church would unite to condemn the errors which afflicted the world. By remaining undivided, the Church would regularly triumph against such malicious efforts. However, we currently find ourselves in a time where the Church is divided, and her teachings are being undermined by the same people who profess her Creed. Among these people is Fr. James Martin, a Jesuit priest who openly promotes Catholic acceptance of homosexuality. This despicable sin against purity has been held by Catholics for centuries as one of the worst, but now many Catholics are hearing and accepting this new philosophy which is completely contrary to the Faith. The TFP has held countless peaceful protests against the “Rainbow Jesuit,” which consist of the praying of the Rosary and the singing of hymns to Our Lady, who is the perfect example of purity. These Rosary Rallies are often successful, and lead to the cancellation of Fr. Martin’s speaking engagements. However, this priest is still able to corrupt the minds of many people with his teachings, and we cannot cease to cry out against these atrocities.

The fight against Fr. Martin’s ideas is necessary, otherwise many souls will be lost. The language he uses in his speeches misinforms Catholics on homosexuality and transgenderism. He has promoted the idea of welcoming people into the Church who completely contradict Her teachings. In the past, Fr. Martin has shown a desire for bringing same-sex “wedding” services to the Catholic Church and expressed support for same-sex couples to kiss during Mass. These ideas are a strike to Our Lord’s face. Christ died for our sins, but Fr. Martin supports allowing the same sins He died for to take place in His Church. Fr. Martin refuses to acknowledge that these actions are sins against purity, but believes that Catholics need to build this “bridge” to sin. Eventually these ideas will spread to Catholics in all countries, and these sins will be regarded as a “right.”

Many liberals in our day, including Fr. Martin, insist that all are welcome in the Catholic Church. However, the fact remains that those who hate Her and Her teachings should not be permitted to take part in Her. Why should the Catholic Church, which has existed for thousands of years, change for a group of people who are not willing to separate themselves from their sinful lifestyles? Allowing those who reject the teachings of Christ to participate in His Church will only lead to more scandals and lost souls. Fr. Martin must be prevented from spreading his errors any further, and it is Rosary rallies that lead to the cancellation of Fr. Martin’s speaking engagements. If faithful Catholics persevere and continue to hold these peaceful protests, the day may come where Fr. Martin’s false teachings will cease to spread. Each of us should show resistance to these false ideologies and the spreading of them in any way possible. The future of the Catholic Church are in the hands of those who are willing to fight for Her.