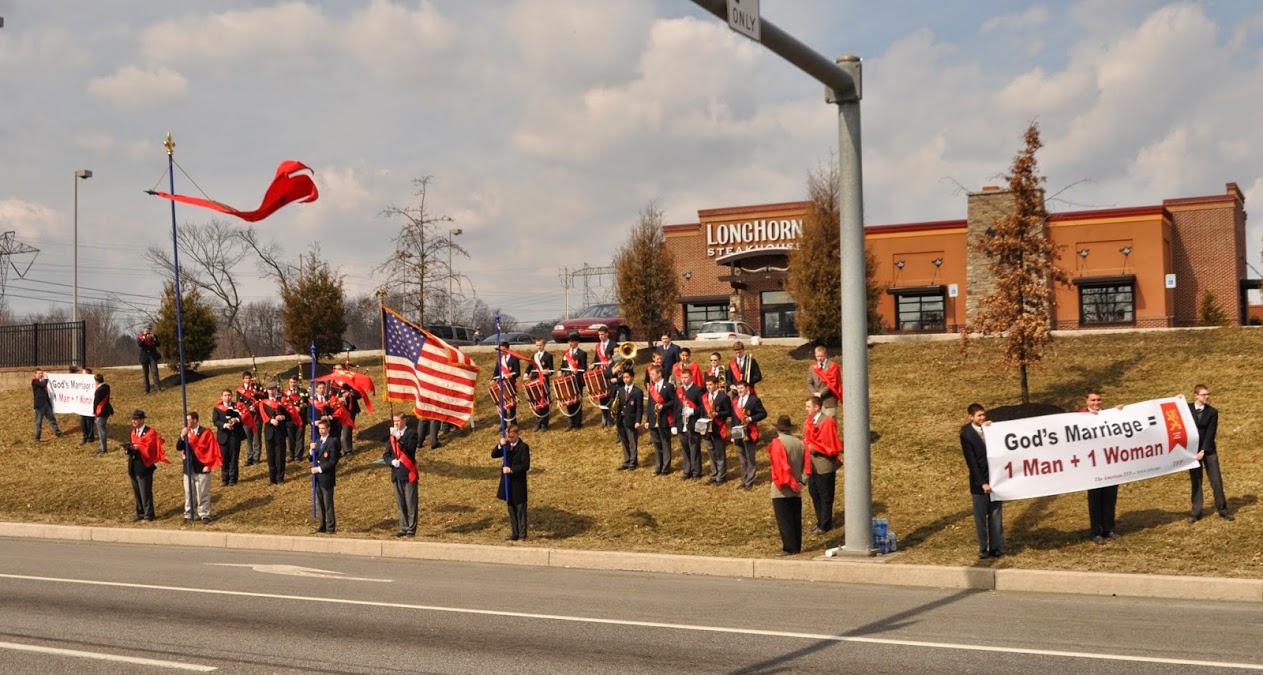 With red capes, standards and rosaries, St. Louis de Montfort Academy traveled to Selinsgrove, Pa, to take part in one of 250 traditional marriage rallies on the 22nd of March, 2014. Knowing Our Lady’s promise at Fatima of her eventual victory, the students and staff confidently prayed that God’s marriage would be protected from the vile onslaughts of the homosexual agenda. In between the Rosaries, The Holy Choirs of Angels Band played religious hymns and patriotic songs such as Hail Holy Queen and God Bless America. Also, to counter the confusion spread by the media on same-sex “marriage”, students held two simple, but clarifying banners which read: God’s marriage = one man and one woman. Confronted with such a reason, several opponents to the rally slowed down just long enough to throw an angry, sulky look at the campaign before driving off. One young lady nonetheless decided to challenge the campaign and approached us. However, her arguments based on sentimentality could not survive the logical, reasonable arguments supporting traditional and the only true marriage. Not to say that there was not any support, quite the contrary, the majority of the people passing by were very happy to see traditional marriage defended and showed their support with thumbs up or honking. This rally proved two things. First, those in favor of homosexual “marriage” can only cite sentimental reasons which are inferior to logical and principled reasons. Secondly, the rally proved that the majority of people support traditional marriage, contrary to what the media says. Although small, the rally for traditional marriage exposed the homosexuals’ weakness and encouraged those in favor of traditional to stand out. With the Rosary finished, the rally ended with the rousing TFP battle cry;“Tradition, Family, Property! … America! America! America!”