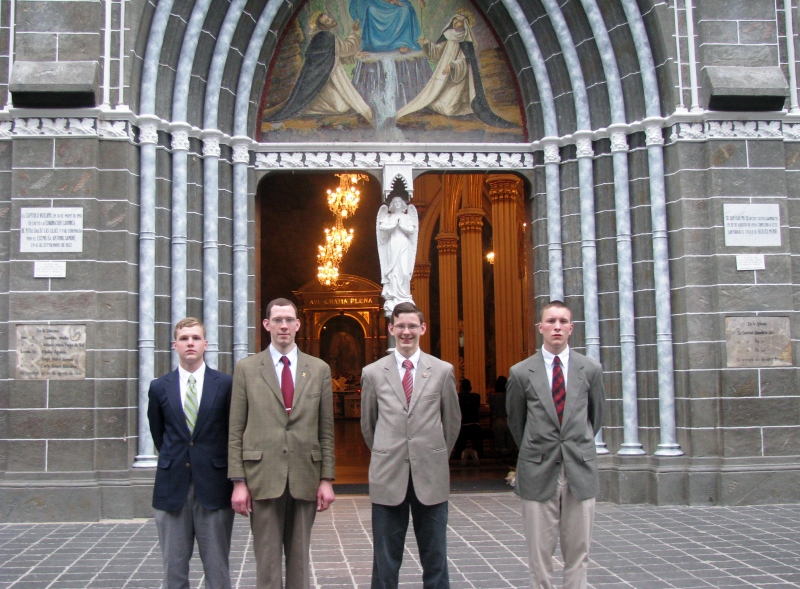 There is no feeling like waking up in the morning, hearing the clatter of feet outside on the cobblestone roads, the venders shouting their advertisements in a foreign language, and the soft tropical breeze blowing in through the open window. For an American like myself,  the trip I made to Ecuador in late April of 2013, was full of memorable feelings and experiences. However, the most treasured of these memories, was moving the statue of our Lady of Good Success. Twice every year, the statue of Our Lady of Good Success is moved. In Quito, Ecuador, where the statue resides in a Conceptionist convent, it normally occupies the seat of the mother-superior in the choir loft. However, during the month of May, the statue is moved to the niche above the main altar. I was in a group of three students and a staff member of St. Louis de Montfort Academy who came to help as representatives of the American TFP. The ceremony itself which was solemn and majestic, was carried out by the TFP members and Conceptionist nuns. The majority of the ceremony is the procession from the choir loft to the front of the church. This took a surprisingly long time because to get to the front of the church, we had to pass through the convent to the sacristy door. While we carried the statue, the nuns sang and processed before us at lingering pace. As we slowly made our way through cloisters or across small walkways, I was overtaken by an awe and admiration for the religious life. Perhaps it was the setting sun casting brilliant streams of light across the sky, or the calming voices of the nuns as they solemnly sang praises to Mary, but I felt completely at peace. There is no doubt to me that just as someone in a possessed house or masonic lodge can feel a uneasiness or tension, in a similar way I felt a blessing by being in that sacred place. By the time we reached the main altar  it was already quite dark outside and the church seemed to be completely empty except for the small patches of candlelight from the sanctuary lamp and the fading light from the windows. After the lights been turned on and the gold shined brightly off the walls and pillars, we began raising Our Lady to the intricately designed archway above the main altar. The church soon became filled with life as the crowd that was following poured in behind us pushing to get close enough to touch the statue. Our Lady was then positioned and returned Her light blue cloak with gold lace trimming. Next we placed the gold crown on Her head, and dressed and returned the Child Jesus to Her loving arms. It was not long before She stood in all Her splendor above the altar in a great display of authority and majesty. After the crowd slowly slipped away into the night and we were left in the church alone, we began a vigil in honor of Our Lady by recitation of the rosary. The hours swept by filled with many prayers and petitions for friends and families back home. Before I knew it, this dim land of prayer slipped away with the waking sunlight which had faded not so long before. The next morning, as we found ourselves walking down the damp cobble streets back to our lodging, despite being tired we were all still engrossed by that beautiful sight of

Our Lady standing over us. It was not till after I had returned to America that I learned of a prophecy of Our Lady of Good Success which stated that there will always be a saint at that convent. I wish I had learned this beforehand but now it helps me understand the multitude of graces I received without even knowing. Although that was the only ceremony I was present for, we were still able to visit Her every day while we were there. We visited many other great churches in Ecuador and even the church of  Las Lajas in Colombia, but more than any of the others, I remember that marvelous church of the Conceptionists where Our Lady of Good Success still resides today.