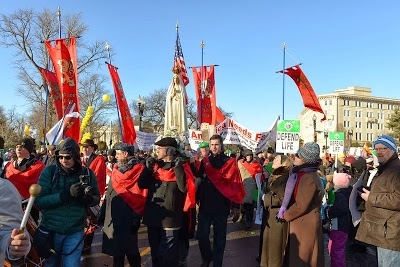 Imagine, if you will, frigid temperatures, wind, and snow, with TFP standards flowing through the air. This is what the students of the Saint Louis de Montfort Academy and I braved at the March For Life this year. It was a phenomenal event, in which we strove to defend the unborn. The temperature was in the single digits or below zero during the entire march. It was as if we were in a walk in freezer. But, in spite of the freezing weather, the Holy Choir of Angels band played Patriotic and Scottish music, giving not a complaint about their cold hands and freezing instruments. After each song, an enthusiastic cheer rang from those marching by. After nearly an hour, we reached the Supreme Court building of the United States and played the song that is most important to every true American, “The National Anthem.” As the trumpet sounds rang through the air, people instinctively put their hands on their hearts. The March came to a close with the overwhelming enthusiastic battle cry of the TFP. With even more enthusiasm than before, we marched away playing “God Bless America”. Though the weather made us very uncomfortable and made us suffer bodily, our souls were soaring and full of joy, and perhaps this March was superior to most every other march around the United States for the hardships endured.[pe2-gallery album=”http://picasaweb.google.com/data/feed/base/user/104928692172889205369/albumid/5974056998085037425?alt=rss&hl=en_US&kind=photo” ]