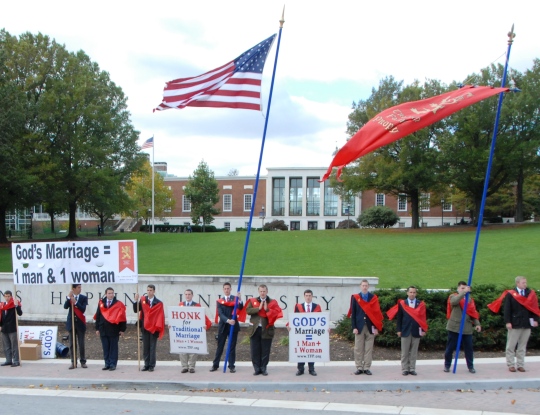 ​On October 20, 2014, several students from St. Louis de Montfort Academy were able to assist the TFP Student Action with a Traditional Marriage Caravan. The caravan was one week long and took place in Maryland and Virginia, as well as in Harrisburg, Pennsylvania.
​We started the caravan in Fairfax, Virginia. The day was very beautiful with blue skies, cool temperatures and a light breeze which blew the TFP standard. After a semi-receptive campaign, we took a short drive to the NRA headquarters and took a tour of the National Firearms Museum. There were over 2000 guns there, ranging from the wheel-locks of the 1600s all the way to the assault rifles used in modern warfare. One of our favorite guns was a massive quintuple barreled shotgun. There were many pictures taken and it was an experience not to be forgotten.
​ After several days of street campaigns, we moved on to Johns Hopkins University in Baltimore. The reaction here was the most hostile yet. Within the first fifteen minutes, a man walked up to us and began yelling at us. He used the excuse that we were ”disrespecting” the song Scotland the Brave. Several members quickly responded to his threats and stood their ground, even when he began throwing punches at our camera man. When he saw that he was greatly out numbered and we were not reacting to his hostilities, he quickly fled the scene. He was not the only one who did not like our bagpipes. Throughout the campaign, students would yell “You’re disrespecting the bagpipes.” What these people failed to realize was that the bagpipes are instruments of war, and that we were there to fight a battle in the war against the homosexual agenda.
​


The next day was spent mostly driving. We drove to farther south to Virginia Beach. Our plan was to tent camp by night and do campaign by day. The first night we ate our dinner to the roar of F-16s flying over our heads as they made their way to the Naval Air Station near by. One caravanista (a Portuguese word for a person on caravan) commented on the jet noise saying, “I feel sorry for the Iraqis. They had to live with this for almost ten years!” The next day we awoke bright and early to go on campaign. We had a very successful day with immense amounts of Honks for Traditional Marriage. The atmosphere here in Virginia was much more friendly than in Maryland and Pennsylvania. One could tell that people were much more conservative than they were in the North. After campaigns, we returned to our campsite, had a good meal, and enjoyed telling and listening to stories around the campfire. The next morning we attended Mass at a local parish. After Mass there was a light brunch served. This gave us a chance to visit with the parishioners and tell them about the activities of the American TFP. The people here were very interested in the Academy. One mother who upon hearing about the academy from several students said jokingly, “I have a son who’s twelve. Here, you can take him.” This gathering gave us encouragement for the rest of the caravan. Later that afternoon, we went to the U.S. Naval Museum and toured the USS Wisconsin, an Iowa class battleship that served from World War II all the way to the First Gulf War. The next morning we all awoke before sunrise and headed out to the beach. We raised the standard and went swimming as the sun rose over the horizon. The changing colors of the sky as the sun began to rise was perhaps one of the most beautiful sights we had ever seen. It was an awesome sight to see the sun pop up over the horizon. We returned to the campground with a hot breakfast waiting for us. We then struck camp and headed back North.
​

Our final campaign was in Baltimore, Maryland. We arrived late in the afternoon and were just in time to catch the rush hour traffic. We received a good reaction from the public on the issue of Traditional Marriage. It was a long day yet we were reluctant to go home. However, we were ready to continue to fight for Our Lady.

​It was a good caravan. We did what we had set out to do, that is, defend marriage and let others know that they are not alone in this fight. We were tired and sore, yet happy. Being on caravan fighting for what’s right gives one true happiness. In conclusion, a wise man once said “We are so few but Our Lady has not taken the immensity of the task from us. Let us go ahead! Let us be, as it were, inebriated with the Holy Ghost in face of this reality, and let us go ahead!”