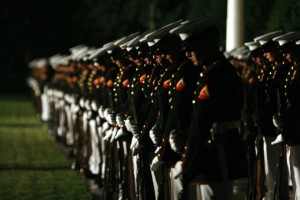 Few experiences have impressed me more than when I saw the “Evening Parade” at the Marine Barracks in Washington, D.C. First, I was impressed with the sharp uniform of the Marines. Each Marine had a white military hat with a black visor, adorned with the insignia of the Marine Corps, a golden eagle, globe, and anchor. Their black top coat, bordered with thin red line, was decked with gleaming brass buttons, medals, awards, and symbols of rank. They wore black shoes, shined so well that they looked like black crystal. Contrasting crisply between the black top coat and shoes, their trousers are immaculately white. If their uniform looked so impressive, imagine the panoply of over one hundred Marines!

Now the Marines are ready and one hears two clear rings of the bell, announcing the commencement of the ceremony. They march onto the field with such precision that they seem to be only one man. An order is given to fix bayonets on their rifles. Their movements are solemn, but firm and they fix their bayonets with so much unison that one seems to be looking at a display of mirrors. Once all their bayonets are fixed, one company is chosen to execute the ceremony. Marching to the center of the field, the company forms a single file line for inspection. The commanding officer stops before one soldier who tosses his rifle in the air. As the rifle makes somersaults in the air, flashing its sharp bayonet, one hears the spectators suddenly breath with dreadful expectation. However, the officer catches it with the utmost ease and passivity, inspects it, and flings it from behind his back. The soldier catches it and repositions it as if it had never left his shoulder. Then the officer stands between two soldiers who toss their rifles both at the same time. Without a flinch, he receives both rifles, returns them and they begin a military juggling act, involving great danger on account of the sharp bayonets. All this, however, is just the beginning and after a few more inspection feats, the company positions itself to commence the most awe-inspiring part of the ceremony.

The company executes the “Silent Drill” by forming two lines which crisscross each other, forming beautiful geometrical lines and patterns. All the while, the soldiers are doing a whole array of maneuvers with their rifles. Sometimes they slam the stocks of the rifle on the ground and other times they spin their rifles, nearly cutting each other’s noses off! All this is done without any commands. Each and every soldier must know precisely what to do, in the risk of being cut or stabbed by a bayonet. The company continually marches in perfect cadence, while they slap and slam their rifles all together, making it sound like great thunderclaps. After a great many “awes” and “wows”, they end the incredible drill and the crowd returns the thunder of the rifles with the thunder of their applause.

Last, but not least, the ceremony is topped off with the presentation of the Marine Band and the Drum and Bugle Corps. Dressed in red top coats, instead of black, the military musicians march with their shining silver instruments. The most striking instruments there are two tubas that were designed in such a way that the player carries it on his shoulder like a bazooka! It is unbelievable to see how they march back and forth and, yet, play with the best tuning and quality. If one were merely to listen to their music and not look at them, one would not be able to perceive that they were marching. Of course, they play American military marches, but they also play marches from other countries as well. Changing from quick step to solemn step, they played “Scotland the Brave,” imitating the chords of Scottish bagpipes. After they played their whole musical repertoire, they march out of field, followed by all the Marine units. The lights are dimmed and the spotlight turned to the very top of the barracks where there stood a lone bugler sounding “Taps” with his bright silver bugle. The most impressive military parade ended, but it forever remains in the memories of all who saw it.