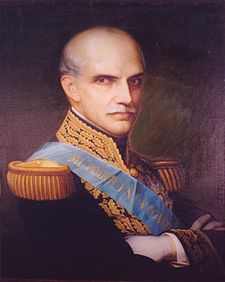 Gabriel Garcia Moreno led the Republic of Ecuador in the middle of the nineteenth century. During his life, he worked to better his country and for the defense of its Catholic Faith. By his heroic and patriotic efforts, he restored order to Ecuador, strengthened the Catholic Church’s position there, and made the country once again prosper. Because he practiced virtue his fight against the enemies of the Church was successful. He was a loyal and true son of the Catholic Church.Gabriel García Moreno: President of Ecuador

Garcia Moreno sacrificed his life to uphold his Faith and the honor of his country. After his re-election to the presidency, his enemies, the Freemasons and Liberals, determined to have him killed.1 When rumors of attempts on his life were told to him, he was calm and did not become apprehensive like Elizabeth I of England.2 On August 6, 1874, Garcia Moreno received Communion and attended Mass for the last time.3 He entered the Cathedral around noon to pray. The assassins became impatient. One entered and told him that urgent business awaited him. Upon leaving the Cathedral, the murderers fell on him. One cut him with a cutlass while the others emptied their revolvers into him. Since his coat was buttoned up, he could not reach his revolvers and defend himself.4 As the assassins were preparing to make their escape, one said, “Die, destroyer of liberty.” Garcia Moreno responded with the phrase “God never dies.”5 He was moved to a nearby house where he received Extreme Unction and then died.6 His attitude towards death and his final words show that his religion penetrated the depths of his soul. As it had expressed itself in other actions, it also manifested itself at the hour of his death.

Garcia Moreno’s Catholic character shone especially bright in the relations that he established with the Church and the Papacy. When the Papal States were taken over by Victor Emmanuel, all of the powerful states of Europe were silent.7 As president of Ecuador, Garcia Moreno sent a circular letter to those countries protesting their indifference and offering his aid to the Pontiff.8 During his presidency, he also made a Concordat with the Holy See. It gave the Church all of her traditional rights and abolished the abuses that had begun under the prior anti-Catholic government.9 This action along with the recalling of religious orders, which had been expelled by the previous rulers of Ecuador, excited the anger of the Liberals and Radicals.10 Especially for these reasons, the Liberals sought his death.11 These actions are those of a Catholic who is willing to sacrifice his position, fortune, and even his life for the Church. His loyalty to the Church did not tarnish in any way his patriotism.

As president of the Republic of Ecuador, Garcia Moreno upheld Catholic values and the honor of his country. After defeating and expelling the Liberals under Urbina, his first efforts in the government were to make the new constitution favorable to Catholics. Due in part to his support, the clause that forbids the entrance of heretical sects into the country was maintained.12 He was then unanimously elected president, but he refused to take office until the congress authorized him to make a Concordat with the Vatican. When this request was granted, he took office.13 His next action was to reform Ecuador’s economy, which had been in chaos for the last thirty years. He balanced the budget and made the country prosperous.14 To counteract Liberal-Masonic technique of secularizing education in order to control the future of the country, he recalled the Jesuits and other religious that had been expelled.15 Besides raising the level of education, they also set to work to convert the Indians and bring fallen away Catholics back to the Faith. Along with this, he reformed both the army and the prisons.16 Even a famous historian (a non-Catholic) says, “He [Garcia Moreno] contributed more to the economic and cultural welfare of his country than any other president of the nineteenth century.17

One normally hears very little of Garcia Moreno, which could cause some to think that he is not very important. It seems to me that his enemies use silence as a way of hiding his work and life. This also shows that his life and work were Catholic because many people who do not like Catholic works surround them with silence.18 When they do mention him, it is quickly and usually done to show his “religious fanaticism.”19 As a good Catholic, he was loyal to the Papacy and respected the Pope’s authority, which many Catholic countries at that time allowed to be hampered. Since Our Lord Jesus Christ chose Saint Peter as head of the Church, Garcia Moreno’s position of obedience was definitively correct.20

One other important characteristic that shows his virtue is his patriotism. Patriotism is a virtue that involves loyalty to country and working for its good.21 While Garcia Moreno was president, he bettered the country both spiritually and materially, as was shown above. His actions as president of the Republic of Ecuador were both charitable and just. He has a balanced view of life, which is a quality of temperance.22 Garcia Moreno has not been canonized, so one could say that he does not deserve such praise. But if no one speaks or writes about him, he will never become well known.

From what I have read about the life of Garcia Moreno, he seems to be a loyal Catholic and a competent leader. Once he realized the importance of his Faith, he made it influence every sphere of his life. Good leaders must have certain qualities. They must know the common good of the group they lead and try to use the best means to obtain it. Also he must have a strong will and keen perception and intelligence so that the group will follow and obey him.23 Garcia Moreno plainly saw that a strong Catholic government was needed to repair the evils of the liberal regime.24 Most of the Catholic people in Ecuador supported him. He had a strong will, as he was never deterred from his goals by pressure of any kind. The people enthusiastically followed him, showing that he had the necessary qualities of a leader

As the enemies of the Catholic Church persecuted Garcia Moreno throughout his life, we know they hated him. They finally killed him because he was a “Destroyer of Liberty.” Truthfully, he only destroyed the liberty that the Freemasons and liberals had used to attack the Church. He did not give freedom to evil. In the country he ruled, only the good had freedom. For this reason, the enemies of the Church hated him and eventually killed him. Even when faced with tremendous difficulties, Garcia Moreno was not discouraged. The intransigence of his position is an example for Catholics who are faced with the corruption and pressure of the modern world.

His heroic death, his loyalty and good relations with the Papacy, and the good he did for Ecuador while he was president show that he was a true Catholic-leader. He ruled Ecuador justly, established order and peace, and expelled the enemies of the Church. His actions show that he was a Catholic in every aspect of his life. In regards to the Papacy, he had the strong loyalty that is characteristic of a good Catholic. Finally, his death came as a result of practicing his religion. By seeing Garcia Moreno’s integrity and strength, we have an example.

Correa de Oliveira, Plinio. Revolution and Counter-Revolution. York, Pennsylvania: The American Society for the Defense of Tradition, Family and Property, 1993.