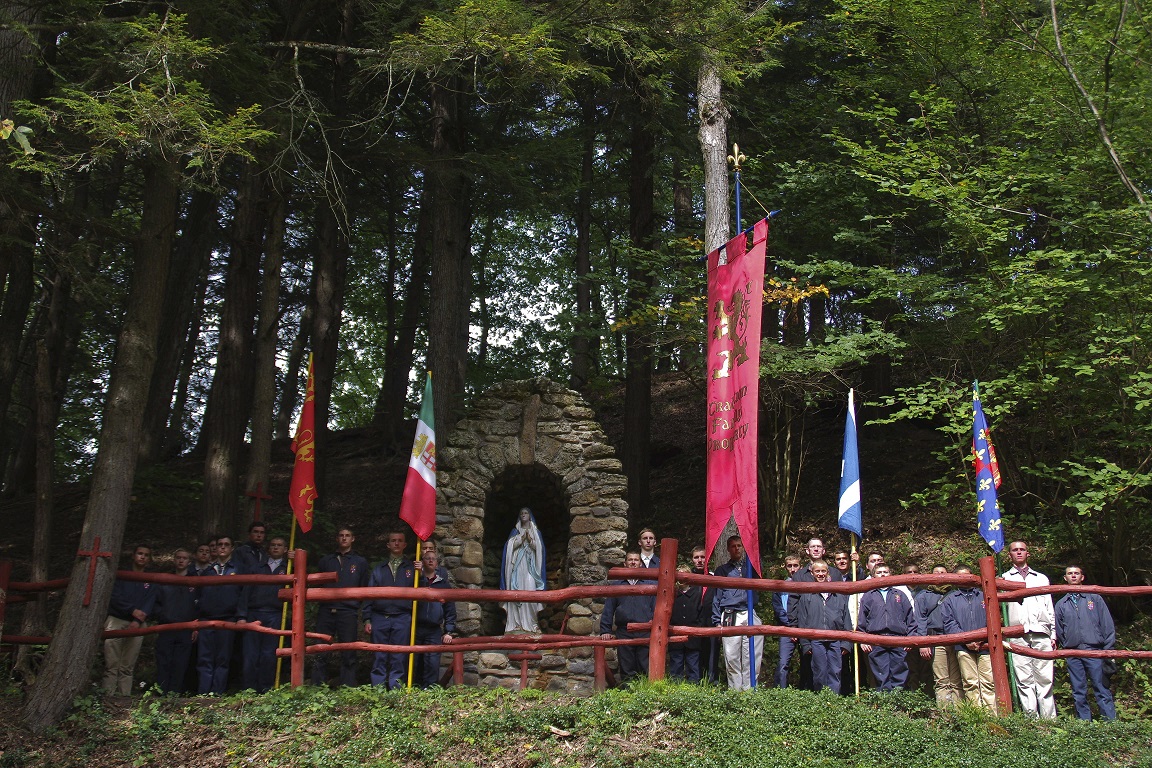 On September 25th, the students and staff of the Saint Louis de Montfort Academy embarked on a trip to the North American Martyrs Shrine. The shrine is located in Auriesville, New York, and is where Saint Isaac Jogues and his companions landed. The trip up to New York took about five hours, and it was evening by the time we arrived. We camped out overnight at a campsite, and the next morning, after breakfast, we loaded onto the bus to drive partway to the North American Martyrs Shrine. Once we drove about halfway there, we got out of the bus and walked the 4 remaining miles. When we arrived, we went around back to the place where St. Isaac Jogues, St. René Goupil, and the rest of their companions would have disembarked from their boats. We saw the town in which they were kept prisoners, and where they did a lot of their catechizing. We saw the Church that was located there, in the center of the town. Inside the church was a centuries old statue of Our Lady, which St. Isaac Jogues and his companions had brought over from France. After spending some time praying in the church, we went to go eat lunch. Afterwards, we went and saw the ravine in which St. René Goupil was martyred by the Indians, and where he was later buried by the holy hands of St. Isaac Jogues. There are signs on the way into the ravine which describe what happened to St. René. The words on these signs are taken directly from the writings of St. Isaac Jogues, who was there when his companion was killed. Around the ravine are trees which have red crosses nailed to them. This is in imitation of St. Isaac Jogues, who used to carve crosses, and the name of Jesus, into the trees in the woods. In the ravine there is an atmosphere and an ambiance of sanctity and peace, brought there by the martyrs who shed their blood out of love. We walked around the ravine taking in the serenity of the sanctified place. We then prayed the rosary in front of the statue of Our Lady which was there. We then started packing up, and we loaded onto the bus. We were all thankful for such a wonderful experience and grateful for being able to go to such a blessed place.