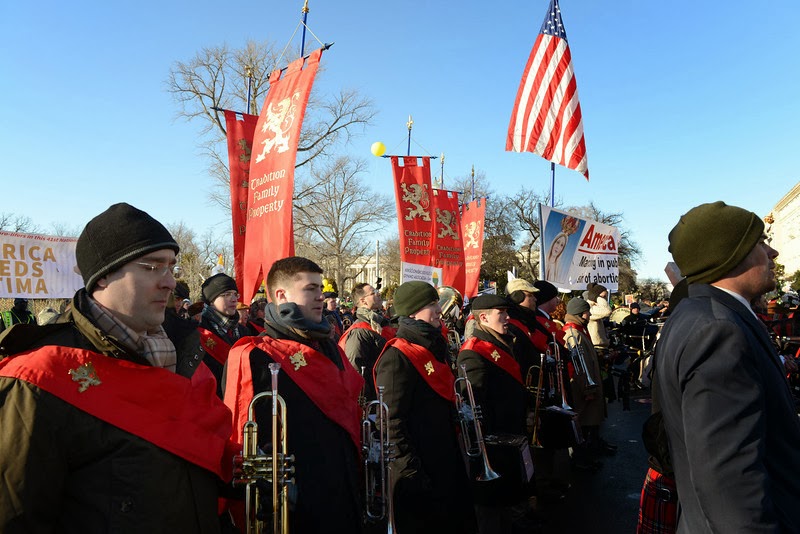 On January 22nd 2014, the Saint Louis De Montfort Academy attended the 41st annual March for life. Waking up at five A.M. We proceeded to prepare our instruments and eat a hearty breakfast. Shortly after breakfast we prepared spiritually with prayers to Saint Micheal the Archangel, beseeching his protection for the upcoming battle. After this it was time to board our school bus for the three to five hour drive to Washington. Upon arrival, I was amazed to see, or rather, feel how cold it was. However, there was no time to worry about the cold, and we immediately started handing out fliers promoting the Virtue of Purity, without which the culture of death will never cease. After handing these fliers out for about an hour, we then headed to the established rendezvous for our band presentation. Again, I was amazed at the effects of the cold, as my instrument (Trumpet) continually froze, requiring several blows of warm air just to thaw out the valves. Again, with no time to worry about the cold, and we started playing our routines with as much enthusiasm as we could muster, despite the frigid conditions. After playing for about two hours atop portable bleachers, we merged into the end of the March, continuing to play our routines. Though we had practiced marching in step before, I still found it hard to keep in step due to the cold. Nevertheless, we continued our march, stopping at steps of the Supreme Court, all the time receiving much enthusiasm from the crowd, which definitely boosted our thawing morale. Once we reached the steps, we played our country’s National Anthem, and said three Hail Mary’s for its sanctification. After this we gave the Brado, or battle cry, of the TFP. The shouts of the Brado; “Tradition! Family! Property!” and “America!” reverberated across the Land of the Free and the Home of the Brave. With that the March for Life ended. However, the fight for life continues, and will only end when Our Lady’s