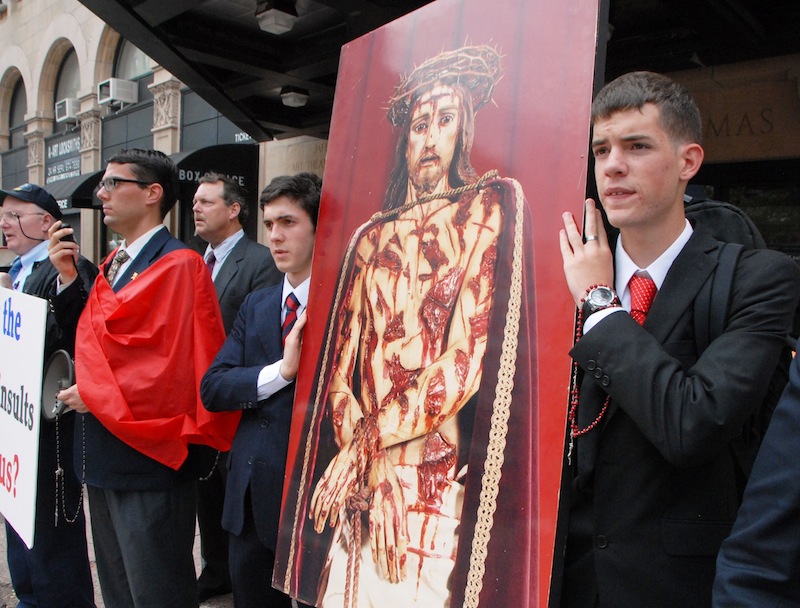 On the 1st of September, 2013, the good and the bad, the beautiful and the ugly faced off once again in the streets of New York. “Paradise Faith,” a blasphemous and immoral movie, had occasioned the encounter.

So with their red capes and militant spirit, the American Society for the Defense of Tradition, Family, and Property, plus boys  from the Saint Louis de Montfort Academy raised the standard of purity and orthodoxy. The contrast was immediate. As the first Rosary started to reverberate in the street, an opposition group formed on the other side of the road. Grimacing and jeering, the group encouraged others to make fun of the protest. They were soon joined by a man brandishing a baseball bat. Undismayed, we continued our hymns to Our Lady, occasionally punctuated by the bagpipes and drums. The seriousness of the protest was soon revealed to the protesters when a passing women shrieked “Hail Satan!” twice, hence proving that this was not a question of free speech but an attack on Our Lord. For some the protest was an inconvenient reminder of purity and of idealism which they tried to bury under an onslaught of verbal abuse. Some passersby were supportive of the protest and even joined in for a few minutes. Towards the end of the protest, a woman in her nineties joined, saying “its good to be back in the trenches.” Thus God was adored and glorified by a few who dared to challenge the Devil in his very pit of vice and immorality.