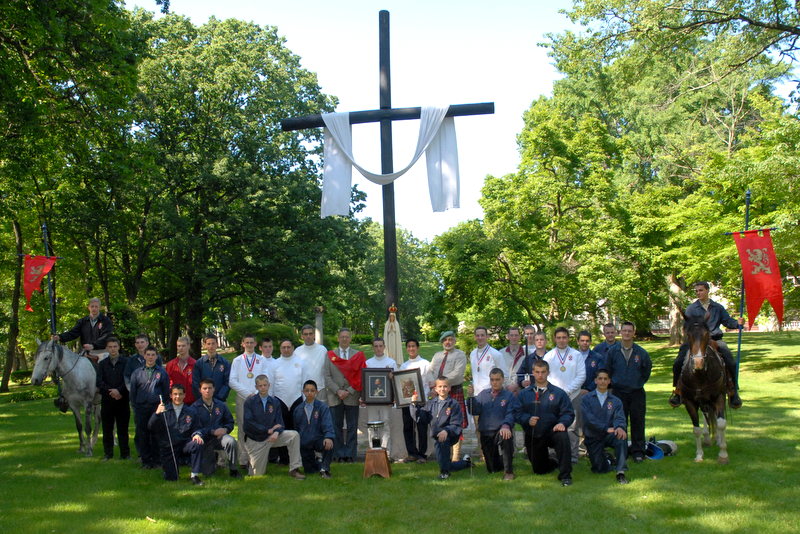 Swords clashed and sparks flew as the students of Saint Louis de Montfort Academy began the La Valette Fencing Tournament on May 19. The Academy and its Call to Chivalry camps highlight the forgotten virtues of Catholic knighthood.

After a prayer, the fencing master calls out:

Students nod and the order is given: “Then fence.”

Thrusts, parries, lunges and ripostes fly in both directions as each fencer attempts to land a red tipped point on his opponent. Now the grueling hours of practice for good form, quick and clean movements and pinpoint precision pay off. Concentration is on full throttle as each fencer analyzes his counterpart’s rapid moves, using skill, self-control, technique and timing to successfully place the perfect thrust and win the bout.

It is a battle of intellect and doggedness more than brute strength. Circling, swinging, blocking and cutting with long wooden swords, the senior Academy students battled using the same methods young squires and knights learned in the Middle Ages.

Surrounded by colorful banners and flags, under a vine-covered arbor and overlooked by a large Cross, one felt transported to another epoch of history. Horses galloped around, their knightly riders carrying standards and swords as Mr. Roark Mitzell, the fencing master, paced up and down in a kilt and tammy, directing and judging each fierce yet chivalrous and respectful engagement.