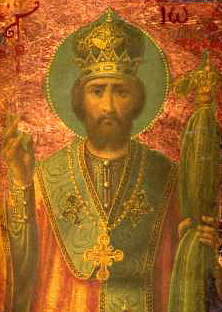 “Renounce marriage, and imitate the angels,” said St. John of Damascus. This is an immense compliment for the virtue of virginity. St. John, of course, is not suggesting that marriage is an evil, but is simply saying that virginity is higher than marriage on the supernatural scale. It is much more pleasing to God when a person remains celibate rather than getting married.

St. John Chrysostom once declared that “Virginity stands as far above marriage as the heavens above the earth.” In marriage, one gives oneself to another person for the purposes of union and procreation. In virginity, one gives oneself entirely to God. Of course, God is pleased to a much greater extent with a life given entirely to Himself, rather than a life that retains for itself even licit pleasures, such as those of marriage, no matter how saintly the latter may be. A proof of this is the fact that Our Lord Jesus Christ Himself chose to be born of a Virgin. The great doctor of the Church St. Augustine went as far as to warn those in the married state to regard unmarried persons as better than and above themselves. An even more shocking statement comes from the Council of Trent. In speaking of a person who declares that marriage is better, more blessed, or above the state of virginity or celibacy, the Council said, “let him be anathema.” No more is needed to further prove this point.

If virginity is such an exalted state, it is also very difficult to practice, and not everybody is called to it. Not only is it necessary to renounce the legitimate pleasures of marriage, but it is also a necessity to maintain a constant vigilance over the evil inclinations of the flesh. “Virginity can be lost even by a thought,” said St. Jerome.

One of the most terrible maladies that can destroy virginity, however, is not a sin of the flesh, but pride. St. Augustine said that the more he saw the greatness of virginity, the more he feared for it, “lest it be plundered by thieving pride.” He went on to say that a married person who lives up to his or her duties and makes it to heaven will have a place lower than most chaste people, while a proud chaste person will have no place in heaven at all. St. Francis de Sales said, “neither widowhood nor virginity has any place in heaven but that which is assigned to them by humility.”

It is an absolute necessity, then, for all chaste people to guard their virginity with the utmost vigilance. If they keep their virginity, as St. Augustine specified, they will have “a special reward hereafter.”