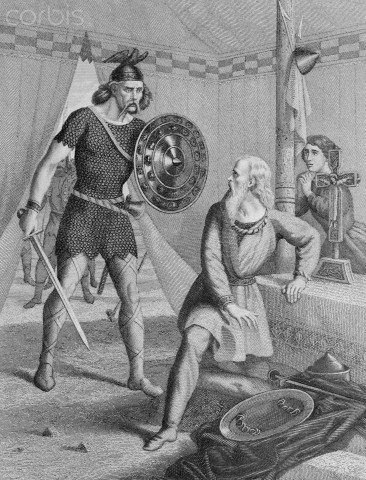 by Augustine Long 10th grade
It was the year of Our Lord 1014. And after eight long happy years of peace and prosperity, High King of Ireland Brian Boru, was threatened by an old enemy. This foe, King Maelmorra of Leinster, a restless and envious man, stirred up the Irish Danes to rebel against the Christian King Brian. King Maelmorra also gained allies from Norsemen in Norway, Denmark, and England. Unfortunately for Maelmorra and his allies, High King Brian was a strong and capable man with an ardent love for God. Able to rally men from all over Ireland, the good king gathered 20,000. On Palm Sunday, 1014, the whole surface of Dublin Bay was covered by Viking ships. On April 23, Good Friday, the Danes decided to attack and moved their troops into the field of Clontarf. The brave and fearless King Brian was seventy-and-three years old. He wished to lead his army in the front, but because of his old age his advisers persuaded him otherwise and to retire to a tent placing the command under his son. Even though King Brian would not participate in the battle, right before the battle began he mounted his horse and with a golden-hilted sword in one hand and a crucifix in the other, he urged his men to meet the enemy with courage and strength. The great and famous battle raged all day and was very exhausting. While his men fought valiantly for him, Ireland, and God, Brian prayed hard in his tent. During the ferocious battle, the evil King Maelmorra was slain; Brian’s brave and valiant son fell to a Norwegian chief. Fortunately, after six in the evening, the Danish ships were carried out to sea by the tide. While trying to get to their ships many Vikings died, while others were cut off of their retreat by Brian’s reserves. Later that day, a Viking chieftain named Brodir, crept into Brian’s tent and stabbed the good King of a united Ireland to death. Though the Irish lost a valiant king they were victorious at the battle of Clontarf and preserved Christian Ireland.