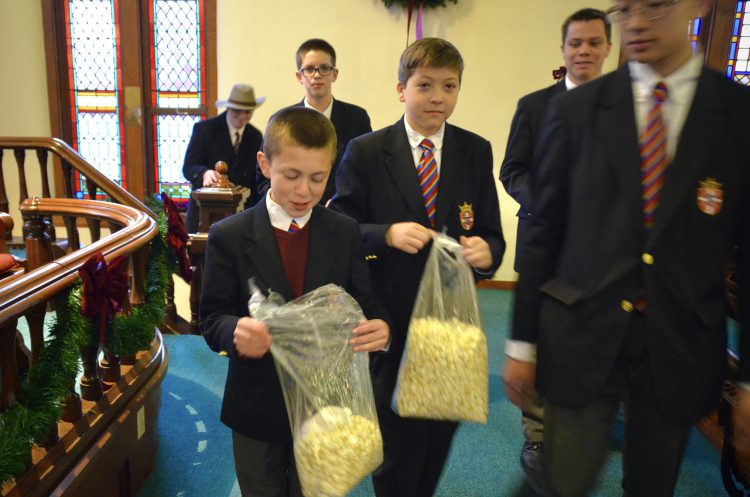 Every year the town of Mifflinburg hosts a traditional German Christmas market known as the Christkindl Market. It is a place where one can enjoy good German food, buy Christmas gifts from local vendors, or just simply enjoy the ambience that is felt there. Every year, the Academy goes to play their instruments and sing Christmas carols, which not only add to the ambience, but serve as a reminder that Christ is the center of Christmas. Unfortunately, Christmas has become so secularized that almost all religious association with the feastday has been erased. This does not mean, however, that buying gifts for others is playing a part in the removal of Christ from Christmas. On the contrary, it is good because it is a way to imitate and commemorate the shepherds and the Wise Men giving their gifts to the Infant Jesus. The Christkindl market presents a good opportunity for following the example of the shepherds and Wisemen. Among the many things one can find there are German beer steins and nutcrackers, hand-carved clocks and other wood work, beautiful pens, German chocolate, and countless other objects. As mentioned before, there is a wide variety of German food sold there. Among the favorites is the Apple Strudel, as seen by the seemingly endless line of eager customers waiting to see if it is as good as its reputation says it is.

The overall tone of the market is very German because it was Germany, as well as other western-European countries, that developed many Christmas traditions. These traditions started because society was in union with the Church, and as a result, the celebration of a religious feast day was rooted so deeply in society that, despite the world’s rejection of Christ and His Church, it is still celebrated. This is why the modern world has not rid itself of Christmas but can only twist it and change the meaning. It is through Catholic traditions, begun by the great saints of Christendom, that Christ is really honored during the time of Christmas.